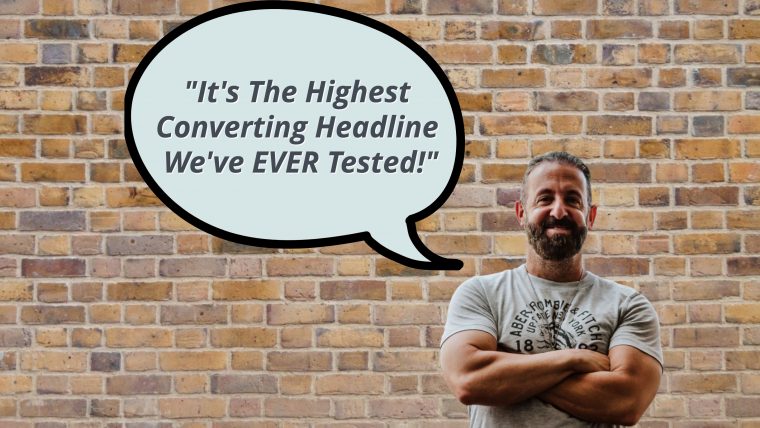 Here’s how it works:

Simply write a headline that appears to be a testimonial…

Then put it in quotes.

When you do that, it appears to be a testimonial, even though you don’t say that it is.

It appears to be an endorsement, conveying a customer experience, but it’s really nothing more than a headline in quotes.

You don’t even insinuate that it’s a testimonial.

You’re just writing a headline in the form of an unattributed testimonial, as if it were coming from a customer, client, patient, or other user.

This is a simple example for a weight-loss product of an unattributed headline testimonial.

“Serious about shedding up to 12 pounds and 7 inches in the next week?”

“I’ve never dropped so much weight and shed belly fat so fast! Incredible!”

This one for a low back pain product.

All you’re doing is writing a statement that you’d love to hear from a client.

Take an ideal endorsement, or a pithy, tight case study, and put it in the form of a headline with quotes.

The beauty of this conversion boosting technique is we’re NOT insinuating it’s a testimonial.

Nowhere does it say it is an actual user or customer comment.

To do this well, think of something that would excite your prospects the most if they heard it from another customer.

What would give them hope, and get them excited to learn more about your product or service?

Whatever that thought is… put it in quotes in your headline.

This is so simple to do, I encourage you to take a look at any marketing campaigns you have running right now, and test a headline like this.

Don’t change anything else!

The funny thing is, you rarely see this used, yet it’s one of those staples in the world of big direct response players.

If you test this headline technique in any of your existing campaigns, I think you’ll be really surprised with the bump in conversions it delivers.

Share Tweet Share Email
Category: Copywriting
Disclosure of Material Connection: Some of the links in the post above are “affiliate links.” This means if you click on the link and purchase the item, I will receive an affiliate commission. Regardless, I only recommend products or services I use personally and believe will add value to my readers. I am disclosing this in accordance with the Federal Trade Commission’s 16 CFR, Part 255: “Guides Concerning the Use of Endorsements and Testimonials in Advertising.”