I’m going to give you a glimpse into the evolution of a Big Marketing Idea.

This is from the financial publishing world. In fact, this is from our friends over at Agora Financial.

I also want to show you a mock lead that I wrote for this same promotion and the difference between my idea and lead, and the final idea for the actual promotion and lead that the copywriter for this promotion came up with.

Today in Part 1 I’ll show you my lead, and in Part 2 we’ll compare with the actual idea and lead that was used for this promotion.

I want you to see how much better his idea is than my idea and hence why his lead and promotion is ultimately that much better than mine.

I want you to see a couple things:

This promotion is referred to as The Social Security Loophole.

It was designed to promote an investment opportunity for a company that owns real estate and leases it to the United States government.

The company collects the lease payments and then “shares the profits” in the form of dividends of payments of payments to shareholders.

With that in mind, here’s my mock lead and idea: 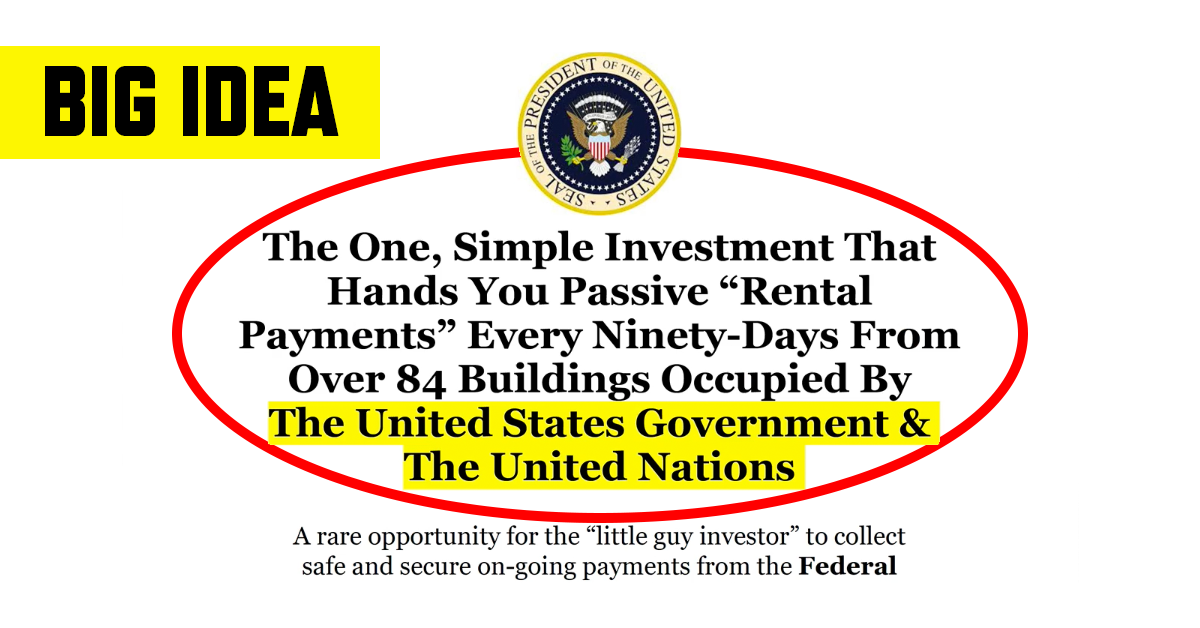 The thing that I want you to see is the idea is very simple and it’s presented right in the headline and subhead.

My idea is simple: it is a unique idea to be able to get paid rental payments from the government. The idea that the government was renting their office space was new and unknown at the time I wrote this lead.

It wasn’t being talked about and so the ability to get rental payments every 90 days from the US government was new and exciting.

Here is the angle that I went with: 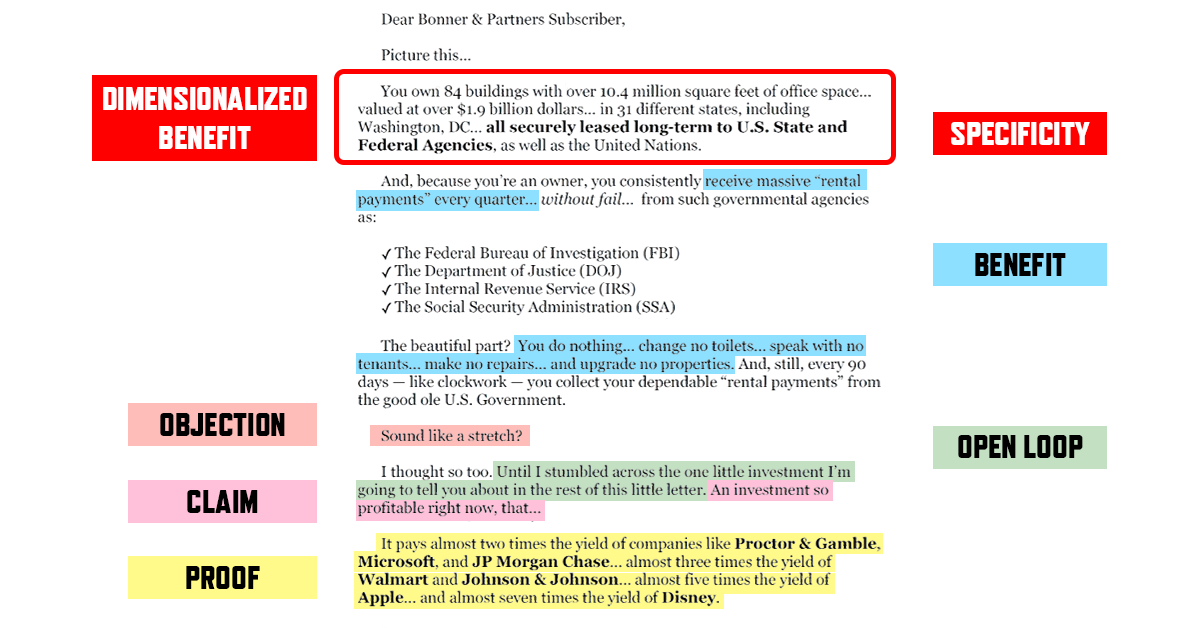 First, I dimensionalized what it means to collect rental payments from the US governments.

“Picture this. You own 84 buildings with over 10.4 million square feet of office space, valued at over $1.9 billion in 31 different states including Washington DC. All securely leased long term to US state and federal agencies as well as the United Nations.”

You’ll also notice there’s a lot of specifics here in this promotion.

This all came from some simple research I did.

Then, I list all these different governmental agencies providing credibility, providing proof, spelling it out and then covering an objection.

“The beautiful part, you do nothing. Change no toilet, speak with no tenants, make no repairs and upgrade no properties.”

“Still, every 90 days like clockwork you collect your dependable rental payments from the good old US government.”

This is a benefit. And then of course, I’m addressing the objection.

“Sound like a stretch? I thought so too until I stumbled across the one little investment I’m going to tell you about in the rest of this little letter. “

Notice the open loop there.

“An investment is so profitable right now that… “

Which should be immediately followed by proof.

Ok, I’ll stop there for now…

I’ll tell you where you can find the complete dissection in just a minute.

Now, this mock lead I created was something unique – but it wasn’t a crazy, big, exciting idea.

The reality is that I can invest in this company that owns the real estate that the US government occupies and I can get paid on that. Truthfully, it’s not the most overly exciting idea.

In Part 2 of this post, I’m going to show you how the original copywriter created a big marketing idea for this wildly successful promotion.

We’ll dive in and we’ll actually look at his promotion in Part 2.

In the meantime, if you want to see my complete copy dissection of every single line of this promotion (not just the lead) you can get it here.

Every single month I dissect wildly successful campaigns so you can see the exact process that A-list copywriting pros of the direct response marketing world use to craft multi-million dollar sales letters.

You can find those copy dissections right here.

Share Tweet Share Email
Categories: Copywriting, The Big Marketing Idea
Disclosure of Material Connection: Some of the links in the post above are “affiliate links.” This means if you click on the link and purchase the item, I will receive an affiliate commission. Regardless, I only recommend products or services I use personally and believe will add value to my readers. I am disclosing this in accordance with the Federal Trade Commission’s 16 CFR, Part 255: “Guides Concerning the Use of Endorsements and Testimonials in Advertising.”